By Rachelle Green, parent in Ling's Dayhome (shared on StoryPark)

The Red Lily Beetle (also known as the Scarlet Lily Beetle) are hungry insects that can devour an entire lily plant! A few years ago, we gave Ling some lily plants from our garden and she planted them by her front step. Two years ago, the Lily Beetle came to our yard and they were munching huge holes in our lilies so Mommy told me to get my shovel and dig them all out, that was awesome! On Thursday when Maddie, Helena, Ling and I returned back from the Green Shack Program, we saw a couple holes in the leaves of her lilies so Ling put on her gardening gloves and we immediately got to work catching 4 beetles! Ling gave us a glass bottle with a lid and this is where we put the beetles. 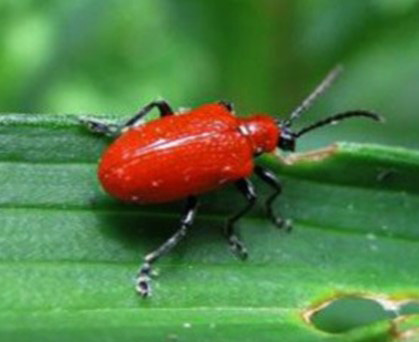 After snack time we went back outside and got to work trying to catch all of the pesky beetles! Maddie was in charge of holding the bottle, opening the lid and closing the lid after we put a beetle into the bottle. Ling wore her gardening gloves and grabbed the beetles then placed them on the sidewalk so Helena and I could use metal tweezers to grab them and put the into the bottle! We caught so many beetles! Beetles LOVE climbing up the bottle and trying to get out! Beetles are fast! We thought they would be comfier in the bottle with something soft to lay on and eat so we gave them some lily leaves, this made them really happy! When we found more beetles than Ling could grab quickly, I just started using my fingers to grab them! We learned that Lily Beetles do not bite. Lily beetles look like ants wearing shells! Lily Beetles have a cool superpower because they can roll on their backs and then their black bellies make them camouflaged which makes it super hard for us to find them in the dirt! We had so much fun with the lily beetles, even after our Mom’s arrived, we wanted to keep catching so Ling kept her day home late for us to keep working! 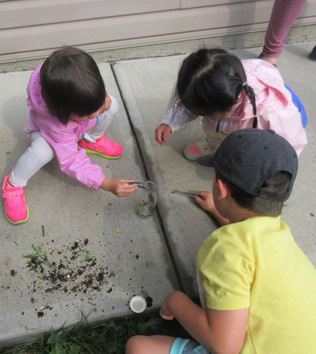 When the Moms said it was time to go, Ling promised us we could hunt for beetles again tomorrow so we gave the beetles extra leaves to keep them happy and Ling said she would poke a hole in the top so that they can breathe! So much teamwork, fun, excitement and laughter!

Friday morning notes from Ling: “Benny asked where the beetles were as soon as he arrived. The children were all worried and curious if the beetles had died overnight and were all excited to hunt for more! I observed a conversation between the children, “Benny: “do you think these beetles will turn into butterflies?” Madeleine: “No, only caterpillars will turn into butterflies”. Benny: “Before dragonflies they look like caterpillars then turn into dragonflies, I am wondering what dragonflies eat? Lily beetles eat lily leaves, caterpillar eats leaves and butterflies eat nectar”. We proceeded to search up what dragonflies eat and found the following information: "Adult dragonflies will eat any insect they can catch. While they usually eat mosquitos and midges, they’ll also eat butterflies, moths, bees, flies and other dragonflies. Larger dragonflies will eat their own weight in insect prey everyday!"

Thank-you for asking us to contribute to this Story Park entry Ling!